Star Wars Celebration Chicago is now just over a month away and the organisers have revealed that a plethora of exclusive art prints will be available for pick-up at the Celebration Art Show. The Art Show, one of the event’s most popular features, will be held at McCormick Place, Chicago, from April 11 to April 15 (inclusive) and will feature a range of officially licensed art that pays ... [Continue Reading]

Make some room in your bookshelves because another must-buy book is heading our way this autumn! Chronicle Books has announced that it will be releasing a new book this October that will showcase the female heroes, villains, rebels, and scoundrels of that galaxy far, far away. The 200-page illustrated tome Star Wars: Women of the Galaxy features stunning cover art by comic artist Jen Bartel and ... [Continue Reading]

Ahsoka Tano was recently featured in 365 Days of Star Wars Women, a year-long project that highlights the female heroes, villains, and scoundrels of that galaxy far, far away and the careers and achievements of female cast and crew members, writers, artists, and cosplayers. This project is the brainchild of Amy Richau, a frequent contributor to the official Star Wars site and FANgirl Blog and the ... [Continue Reading] 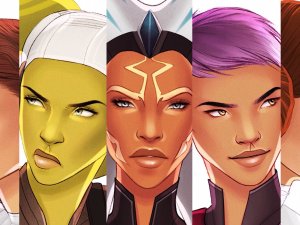 Over the course of its four-decade history, the Star Wars franchise has given us a wealth of compelling female characters: from the princess-turned-general Leia Organa of Alderaan to the Force-wielding former Jedi Ahsoka Tano, from the morally grey rogue archaeologist Doctor Chelli Lona Aphra to the talented and idealistic politician Padmé Amidala, from the Mandalorian artist-warrior Sabine Wren ... [Continue Reading]

Looking for some new Star Wars content to keep you busy until Solo is out? If so, you’ll be pleased to hear that Star Wars: Forces of Destiny will be back on Monday, March 19, with not one but EIGHT brand new episodes featuring our favourite heroines (and heroes) from that galaxy far, far away. Clone Wars veterans Ahsoka Tano, Padmé Amidala, and Anakin Skywalker are among the characters ... [Continue Reading]

If you’ve been following Team Ahsoka on social media for some time or are a frequent visitor to this site, you may remember that I promoted a Kickstarter campaign back in June for the upcoming documentary, Looking for Leia. Thanks to widespread support and donations from Star Wars fans worldwide, the Kickstarter campaign was a huge success and production is well under way. Dr. Annalise ... [Continue Reading]

Longing for more Forces of Destiny stories starring your favourite Star Wars heroines? Then you’re in luck! Lucasfilm has teamed up with IDW Publishing to create a new five-issue comic book series based on the popular 2D animated series. Announced during the Lucasfilm Publishing panel at New York Comic Con 2017, Star Wars Adventures: Forces of Destiny is scheduled to land in our galaxy in ... [Continue Reading] 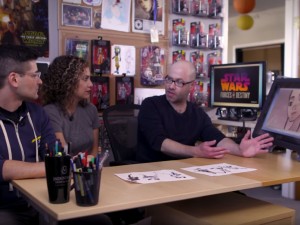 In this week’s episode of The Star Wars Show, hosts Andi Gutierrez and Anthony Carboni went behind the scenes of Star Wars: Forces of Destiny and visited Ghostbot, the California-based animation studio responsible for the micro-series, where they spoke with Brad Rau (Supervising Director) and Tatyana Drewry Carvin (Animation Director). Brad Rau is no stranger to the Star Wars universe. He ... [Continue Reading]

Fans of the 2D animated micro-series Star Wars: Forces of Destiny will be pleased to know that a brand new season of animated shorts will be heading our way sometime in 2018. The announcement was made during the Forces of Destiny panel at HASCON on September 9 and, according to the Collectors Cantina Twitter account, these new episodes will be in addition to the eight shorts that are slated for ... [Continue Reading]

Once upon a time, it was tough being a female Star Wars fan. Perhaps, like me, you grew up hearing the phrase “But Star Wars is for boys”. Maybe you struggled to find other girls or women who shared your love for that galaxy far, far away. Or perhaps you yearned for a wider range of female characters to look up to. Over the past decade, Lucasfilm has done a tremendous job of boosting ... [Continue Reading]

Back in mid-April, Lucasfilm and Disney announced Star Wars: Forces of Destiny, a brand new series of 2D animated shorts starring our favourite Star Wars heroines. A whole range of Forces of Destiny-themed merchandise is in the works, including bedding, apparel, cosplay accessories, and books. But perhaps the item I’m most excited about is this stunning Ahsoka Tano adventure figure, which ... [Continue Reading]

Star Wars Celebration Orlando has barely got underway and there’s already at least one brand-new animated series for us to look forward to later this year! Lucasfilm and Disney have announced that a new 2D animated micro-series, Star Wars: Forces of Destiny, will be heading our way this July and will star all of our favourite heroines from that galaxy far, far away: Rey, Jyn Erso, Padmé ... [Continue Reading]

Happy #TanoTuesday, dear followers. 😎 A casual reminder: I'm a lot more active on Twitter, so if you aren't already following me there, you can find me at @allthingsahsoka (same username as here).
Many talented cosplayers and fashion enthusiasts showed their love for #AhsokaTano on #StarWarsDay 2021. Visit the site (link in bio) to see some of their incredible creations!
Another May the Fourth (#StarWarsDay) has come and gone and with it came another wonderful burst of creativity from #AhsokaTano fans and artists, who took to social media to share their latest creations or repost some of their earlier work.
The youngest Simpson finds herself in a Star Wars-themed daycare centre and among its staff is a familiar-looking Togruta who has zero patience for disobedient younglings but, thankfully, uses far less extreme methods of keeping kids in check than her former master did. #StarWars #AhsokaTano #Ahsoka #TheSimpsons
Happy anniversary to "Old Friends Not Forgotten", which debuted a year ago today and kicked off #TheCloneWars final arc. 💜😭
Look what arrived in the mail. 👀