So, let me tell you a story, starting from the end. Take a quick look at the YouTube thumbnail for The Star Wars Show, from 28th June, 2017.

Look at that grin! When I saw this, my heart exploded with joy and, for a brief moment, I was the happiest and proudest Star Wars fanboy in the galaxy, because you all know who that is… and I built those lightsabers she is holding. Yes, really.

It all began when I decided the time had finally come to construct my own lightsaber. As you do.

The prototype was made from bits of PVC pipe while I sorted out the power cells, multicoloured Neopixel strips, gyroscopes, micro-controllers, and code I needed to make it any colour I wanted and make it go “whum, whum” in a satisfying way whenever I swung it around. I could talk your ears off about Ben Burtt, how he created the original (and now iconic) lightsaber sound, or how my code remixes the base components in real time so that every swing is unique. Don’t get me started. I may be slightly obsessed.

Then I started looking around the internet, looking at all the sabers that have ever been depicted in canon to search for the one that best suited my style. I tried to imagine what my saber should be like; not what I saw, but what I felt in my hand. I really liked Rahm Kota’s saber, with its strips of leather guarding the switch. I’ve trained at dual-wielding swords. At my best, I could duel with a claymore in one hand and a broadsword in the other. It builds hand strength, let me tell you! So I felt an affinity for Asajj Ventress’ dual curved sabers.

And then I saw that scene in Star Wars Rebels. You know the one. The one where Ahsoka owns the Inquisitors at the end of “The Future of the Force”. It was beautiful. She was beautiful. Those pure white blades. Those curved Samurai hilts. I was smitten.

Ahsoka Tano in ‘The Future of the Force’ (Image credit: Cap-That.Com)

So armed with my new 3D printer, I was determined to build a pair of curved hilts fashioned after Ahsoka’s white sabers: a 80cm long hilt for the primary blade, and a 50cm for the short sword. That’s a katana and wakizashi, if you’re a Samurai. I finished the shōtō hours before our local version of Comic-Con, Supanova, took place and finished the daitō later. It wasn’t totally screen-accurate and was limited by the necessities of making a functional device. And a bit chunky, to be honest.

By now, you’ve probably figured out that I’m a little odd; my priorities are different to most people’s. For me, the joy is in the building, not the owning. Every artefact I make increases my skill level, which means that by the time I’m finished, I tend to look at the result and go “Yeah, I can do better”. So I have a habit of giving my creations away. It clears up valuable workbench space for the next project. Like I say, I made them, so I get to do whatever I damn well please with them.

So there I am, with two custom experimental lightsabers… and a decision to make. Who to give them to? Who would most appreciate them? Who deserved them?

It may surprise you that the answer wasn’t actually Ashley Eckstein. Don’t get ahead of yourselves; the path is more wiggly than you think. It’s easy to focus on the headline stars, the famous actors, and the directors, but there are so many people who work hard to make Star Wars what it is. Not just for one movie, but for all those years in between. Those whose task it is to manage the forums and social media accounts and deal with the Dark Side of our fandom (you know what I mean). Those who do all this for us, despite the toxicity they have to endure online. They’re the real Jedi.

My hero is Andi Gutierrez from The Star Wars Show and Rebels Recon. She was there, every week, to brighten my day during some dark times. Doing what she could to send knowledge and joy out into the world. I learned about Rebels – and Ashley – from her. I owed her a debt of honour.

So I sent her a message on Twitter, and she replied. I offered to give her the sabers, and she accepted.

It sounds so simple, but in the past, I’ve actually had great difficulty giving my work away. People always wanted to know what strings were attached, how much it would cost them. And the more I insisted that “No, really, it’s a gift!” the more suspicious they would become. I guess that’s just human nature. But Andi said “Yes”. She engaged. She accepted me. You may not understand how rare and powerful that is. In that moment, I knew I had chosen wisely.

After that, it was almost as if the universe was trying to help me. My housemate’s employer sent her to a conference in the Bay Area. This meant that instead of me paying hundreds of dollars to ship the lightsabers across the world and figuring out ways to get around US Federal laws (which would have prevented me from sending an item containing high-power LiPo batteries via courier), my housemate was able to transport them as part of her luggage and FedEx it locally when she arrived in the States.

The box I made for them didn’t burst, FedEx didn’t smash it, and the bespoke electronics I had hand-soldered together didn’t come apart. All of these were minor miracles. 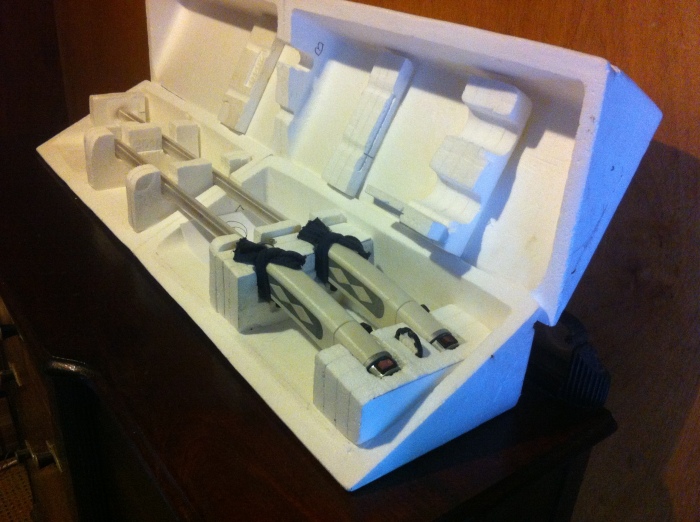 Andi thanked me and sent me photos of the stand she had found for them. Then a week or two later, I pulled up YouTube to watch that week’s episode of The Star Wars Show, and there it was: Ashley Eckstein – Ahsoka Tano herself – holding the sabers that *I* had made. Andi gave me that gift and, with it, a really, really cool story that now I get to share with you.

It’s like a perfect circle. Ashley poured her talent into bringing Ahsoka to life, Ahsoka inspired me to create the sabers, I sent the sabers to Lucasfilm, where Ashley got to play with them. And in the centre making it all happen was Andi.

So if you ever see Andi Gutierrez (aka @DeeGoots) at any of the conventions I can’t go to, you damn well better be nice to her.

It’s tempting to say that that’s what made it all worthwhile, but the truth is, as much as I adore Ahsoka, this was just the icing on the cake. It was all down to Andi – my hero – trying to make Ashley’s day better, as she made mine. It’s what she does, because she’s a Jedi. She follows the tenets of the Bushido Code, which include:

(Some of those names, like Jin and Rei, seem… familiar.)

I hope that this story inspires you and shows you that it’s the random acts of kindness that can matter the most, that there’s value in creating things that can’t be bought or sold. I’ve known this for a long time; it’s not my first ride on this merry-go-round. The “Thank You” card that Andi sent – with its cute stickers and stars – now sits on a shelf of my most prized possessions and treasured memories, next to a Christmas card from author Douglas Adams.

So get out there! Use your skills and special talents to send ripples out into the universe and do it with zero expectations. Most of the time, nothing will happen (that you can see) but you might be surprised by the waves that return. We are all fundamentally interconnected.

Hailing from Brisbane, Australia, Jedi Jeremy is a self-professed maker of artefacts and student of everything.