Mark your calendars, folks! Brand-new episodes of Star Wars: Forces of Destiny will be coming to a galaxy near us on October 1, 2017, and Ahsoka Tano is set to appear in at least two of the eight episodes scheduled for release this autumn.

In the latest promotional video, The Defenders of the Galaxy, we catch a brief glimpse of Ahsoka, Yoda, and Anakin Skywalker in a Jedi training dojo (which may look familiar to fans of Star Wars Rebels) and can see a few short scenes of Ahsoka and Padmé Amidala engaging in some aggressive piloting – and dodging enemy fire – inside an asteroid field. 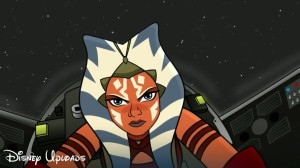 And, don’t forget, there will also be a whole batch of brand-new episodes to look forward to in 2018.

Thanks to Jedi Bibliothek and KnightofEm for bringing the video and episode synopses to my attention.